How do lung cells react on particles small enough to enter the deeper regions of the lung? Often, researchers investigate lung cells grown as culture models in the laboratory to answer this question. The results of those simplified models cannot be directly transferred to complex, living organisms. Researchers of the Leibniz Research Alliance Nanosafety, Saarland University and TU Dortmund analysed a cell culture model that mimics the real conditions a little closer – they grew human lung cells on flexible surfaces that were stretched in a respiration-like mode. Lung cells that were stretched reacted more strongly to added nanoparticles, in a way that resembled an inflammatory response.

“For the investigation nanoparticles’ safety, we have different options to bring classical cell culture models closer to reality.”, says Dr Annette Kraegeloh, leader of the research group Nano Cell Interactions at INM – Leibniz Insititute for New Materials. “One possibility are coculture models, where different lung cell types are grown together. Other models allow direct contact between lung cells and air, a condition you would also find in the lung. A little considered condition so far is the influence of the mechanical strain that the cells experience and that is caused by breathing movements.”

Christoph van Thriel, head of the research group Neurotoxicology and Chemosensation at IfADo – Leibniz Research Centre for Working Environment and Human Factors, adds: “In our study, the same number of particles was taken up into strained and non-strained cells. We therefore conclude that the combination of mechanical impulse and incorporated particles was causing the change in gene activity. This means, that the mechanical strain is a factor we have to take into account in the future.“

Further investigation of lung cell cultures with added mechanical strain will light on the relevance of the model for the safety evaluation of respirable matter. Another question that shall be answered is which internal mechanisms induce the described cell response.

In this video, our experts explain the background of the study (in German only)

Illustration of the experiments 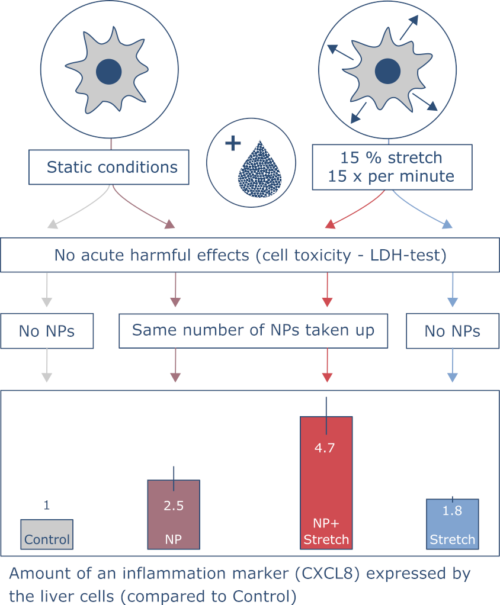 The same number of nanoparticles were found in stretched and non-stretched cells. This was measured by fluorescence microscopy. The NPs used in this experiment were coated with a thin layer of a dye that glows reddish when irradiated with a strong ray of light.

Among others, the scientists measured how much of the signalling protein CXCL8 was produced by the cells. This protein plays an important role in inflammation. They found the highest amount of the protein was produced by cells that were stretched and exposed to nanoparticles. This indicates that the cells reacted stronger if both factors - stretch and nanoparticles - were combined. The results also show that stretch alone influences the lung cells. It is therefore an important factor and should be considered in future experiments with lung cell culture models.

CXCL8 - signalling protein with an important role in inflammation reaction

This study was partly financed by the Leibniz Research Alliance Nanosafety. 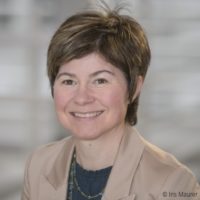